Background and history of Eritrea

Background and history of Eritrea

Eritrea is small country located in northeastern Africa, Eritrea has about 620 miles (1,000 kilometers) of coastline along the west coast of the Red Sea. To the north and northwest, the country borders Sudan, to the south Ethiopia, and to the southeast, Djibouti. Eritrean territory covers about 48,000 square miles (125,000 square kilometers) and contains a wide variety of rugged landscapes: mountains, desert, highland plateau, lowland plains, and off the coast some 150 coral islands.

The topographical variety has affected the social organization and mode of production of the country's nine ethnic groups. In the highland plateau, people live in small villages conducting subsistence plow-agriculture. Many of the lowland groups however, lead semi-nomadic pastoral or agro pastoral lives. The Eritrean capital, Asmara, is located in the highland plateau, the home region of the biggest ethnic group, Tigrinya. The population in Eritrea is about 4 million divided between nine ethnic groups. The highland Tigrinya group constitutes about half of the population. More than 75 percent of the population lives in rural areas. 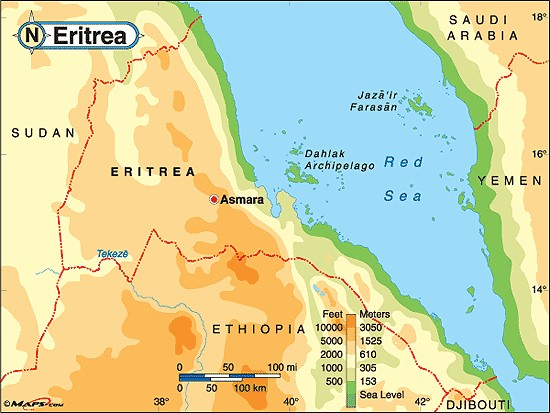 Eritrean cuisine is a reflection of the country's history.Injerra is commonly eaten in the rural areas. It is a sour pancake-like bread that is eaten together with a sauce called tsebhi and (ge-at) The sauce may be of a hot and spicy meat variety, or vegetable based. In the urban centers one finds the strong influence of Italian cuisine, and pasta is served in all restaurants. The lowland groups have a different food tradition than the highlands with the staple food being a porridge (asida in Arabic) made of sorghum.

Both Islam and the  Christian tradition require rigorous observance of fasts and food taboos. Several periods of fasting, the longest being Lent among the Christian and Ramadan among Muslims, have to be adhered to by all adults. During religious celebrations, however, food and beverages are served in plenty. Usually sheep, or goat is slaughtered. The meat and the intestines are served together with the injerra. Traditional (Siwa ) and (Abaeke) is brewed in the villages and is always served during ceremonial occasions. 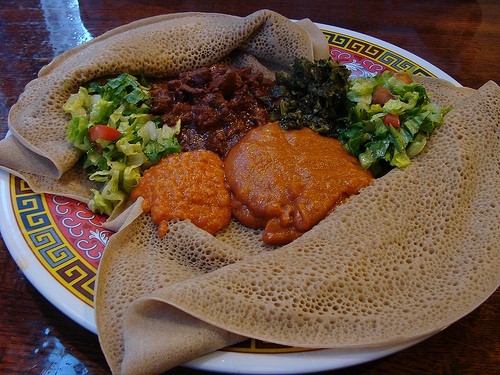 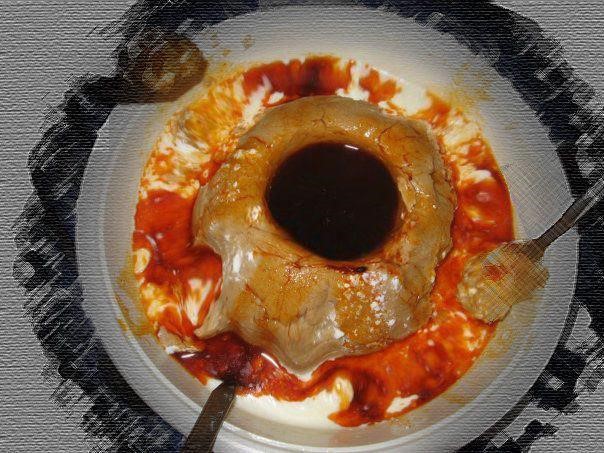 Division of Labor by Gender. Since subsistence agriculture is the main production activity in Eritrea, the division of labor is influenced by custom. Women's inputs in agricultural production is vital but certain tasks, such as plowing and sowing, are conducted only by men. Animals are generally herded by young boys, while young girls assist in fetching water and firewood for the household.

Family and Marriage. Customary rules of marriage vary among the ethnic groups. Generally, girls marry at an early age, sometimes as young as fourteen. Large shares of the marriages in the rural areas are still arranged by the family groups of concern. People live together in nuclear families, although in some ethnic groups the family structure is extended. The man is the public decision-maker in the family, whereas the woman is responsible for organizing the domestic activities of the household.

Child Rearing and Education. From an early age, both boys and girls are expected to take part in the household's activities: boys as herders of the family's livestock, girls as assistants to their mother in domestic affairs. An increasing number of children are joining the formal educational system, although education sometimes conflicts with the children's household obligations. In some of the nomadic and semi nomadic communities, children might be unable to regularly attend classes in the formal educational system.

In some ethnic groups, circumcision is used as an initiation ritual into adulthood. The majority of both Eritrean men and women are circumcised. Female circumcision, or female genital mutilation, is carried out both among Christians and Muslims, although the type of circumcision differs from clitoridectomy to confabulations (the removal of the labia and partial closing of the vagina by approximating the labia majora in the midline).

Higher Education. The institutions of higher education in Eritrea are few, and the only university, Asmara University, admits a limited number of students. In the rural areas most people take up farming, which does not presuppose any formal education. The better-off families and those with relatives abroad try to send their children to the United States or Europe for further education and work.

Health issues the formal health care system is poorly developed. Poor sanitary conditions in the rural areas and lack of tap water create a high rate of infant mortality. Numerous other health problems, including malaria and HIV/AIDS, lack of food and proper water supplies, and lack of trained personnel, continue to burden Eritrea's development of an efficient health care system. Traditional medical beliefs are widespread in the rural areas.